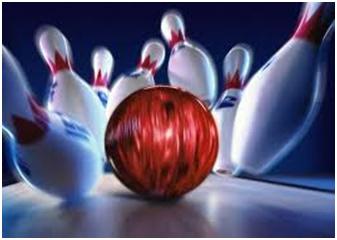 My daughter Meg and her significant other Max invited me to a night of bowling; Max’s treat. As I am completely unable to turn anything down that is free; I leapt at the offer.

I was a bit hesitant at first though. I had not bowled in more years than I care to remember and back then I was not a great bowler, but a capable one. I could bowl almost silently with no loud crashes as the ball hit the middle of the lane. Things have obviously changed since I’d been an almost regular bowler. In the old days, you got told off for hurling the ball halfway down the lane.

Not now. I was about the only person who was bowling “quietly.” I was surrounded by the thuds of balls chucked ungracefully down the lanes. It almost sounded like bombs hitting, so much so that I felt like ducking for cover.

Still it was an enjoyable night and despite my protestations over my lack of practice and skill I managed to win two games and was well on the way to winning the third when our time ran out.

During the evening I only had one reminder of my age and that was when my knee “went” and I sort of hobbled my way to the line as I approached, ball in hand, to hopefully get a strike. I discovered that I wasn’t that bad even with the dodgy knee and I marvelled at the fact that I could even bowl at all. The last time I’d been down to a bowling alley you could still smoke as you played.

So the pleasant part of the evening was realising that I could still get the odd strike without smoking and without the aid of Anheuser Busch‘s Budweiser lager (beer). I guess it is sort of like riding a bicycle, you never really forget how to bowl.

The unpleasant part of the evening came the next day and the day after the next day. I felt like I had run the London marathon, twice. I went to roll out of bed the morning after our “bowl-a-thon” and wound up having to creep out slowly.

My catalogue of aches and pains started with my hips and moved on down my legs to my knees. I felt about a thousand years old and had definitely passed my “sell by” date. After taking my back pills it eased up enough that I was able to take my daily “heart” walk.

This morning, aka the day after the next day, I had the exact same experience upon waking. Creeping slowly out of bed was once again the order of the day and I was so sore that I actually cut my “heart” walk in half.

I am still amazed that the end result of such a non-strenuous activity could cause so much discomfort. A painful reminder of just how far I really have to go before I am even close to my old fitness level. It is a bit disconcerting.

Just as I am getting used to the steady daily improvement of energy levels and endurance levels, I go bowling and have a muscular set back that is as disturbing as it is amusing. I guess that before I go bowling again, I’d better train myself up for it.

Of course I could try something even less strenuous like competitive knitting although the damage to my wrists could guarantee that I never play the violin again. Perhaps Tiddly Winks or Jacks just to be on the safe side.

In reality though, I can be as competitive as I want on an on-line multi-player video game like COD or Black Ops II (which is just COD under a different name) and I will probably do that as soon as I’ve rested up from my one way excursion to Tesco.

I really would like to write more on the subject of my bowling night but it’s time for my session with some Deep Heat.

Now where did I put my Zimmer Frame…

18 thoughts on “Bowling is a Strenuous Sport Now?”